Just added to your cart

Which has more caffeine, Light or Dark roasts?

We all have our own morning, afternoon, or evening caffeine routine. For some (and by “some” I mean myself), this routine is practically a science at this point in their lives: early morning light roast, afternoon dark roast, and a cup of delicious decaf for that occasional night cap.

For coffee drinkers like myself, this caffeine routine has more to do with a specific preference rather than the actual caffeine level in the coffee itself. For others, the decision between a light and dark roast has everything to do with the misconception of how much caffeine is present in a light or dark roast rather than the flavor itself.

For example, you may have heard rumors about caffeine content along the lines of “darker is stronger in taste, therefore it is stronger in caffeine” or “light roast has more caffeine because more caffeine gets burned away.” Like all good rumors, there is some truth to these sentiments, but not much. 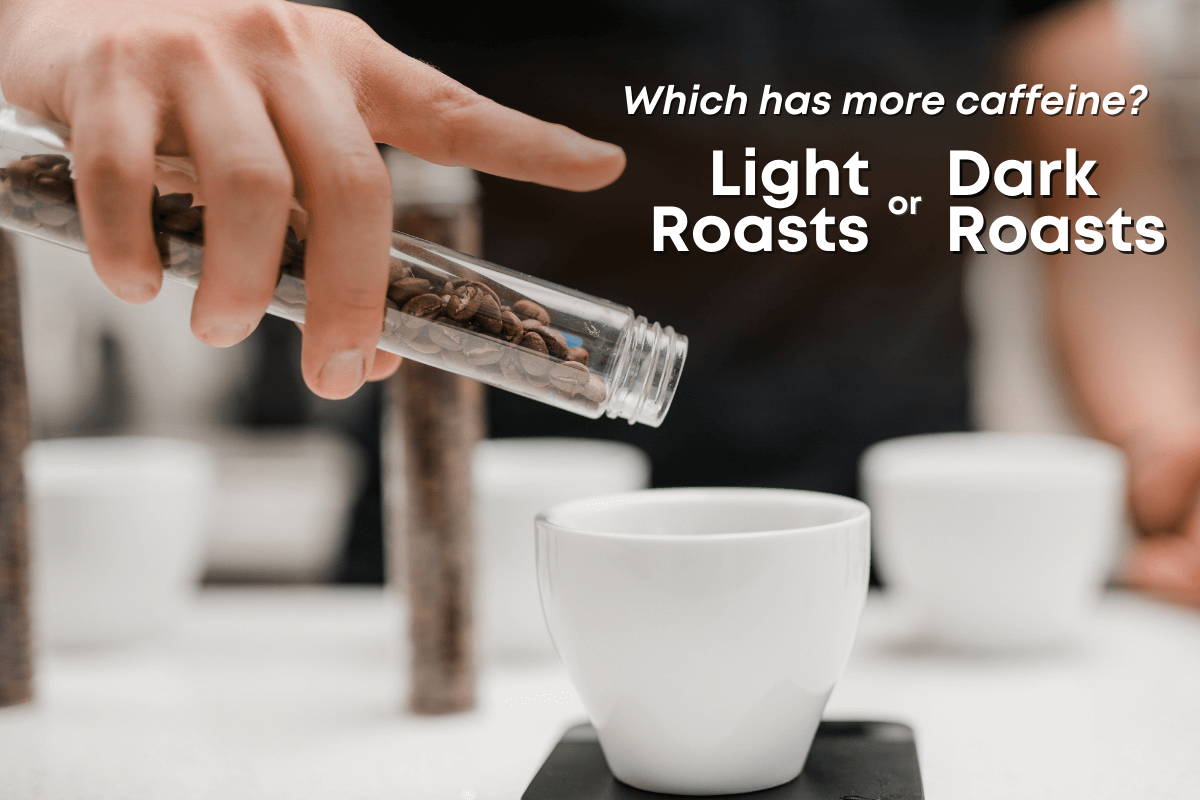 Today’s Alma-nac blog is dedicated to setting the caffeine-record straight: why do so many people seem to think of light v. dark roasts in terms of low caffeine vs. high caffeine? The answer can probably be traced to the 1st wave of coffee, but the confusion has persisted throughout coffee culture for decades because, in truth, the actual variation caffeine content between roasting profiles is a bit complicated to explain.

FIRST THINGS FIRST: WHat is a light v. dark roast?

Before we get too far down a caffeine rabbit hole, it’s probably a good idea to first explain the actual difference between a light and dark roast. We’ll go ahead and let you know that it has almost nothing to do with caffeine content (although that does get affected in certain ways during the roasting process). 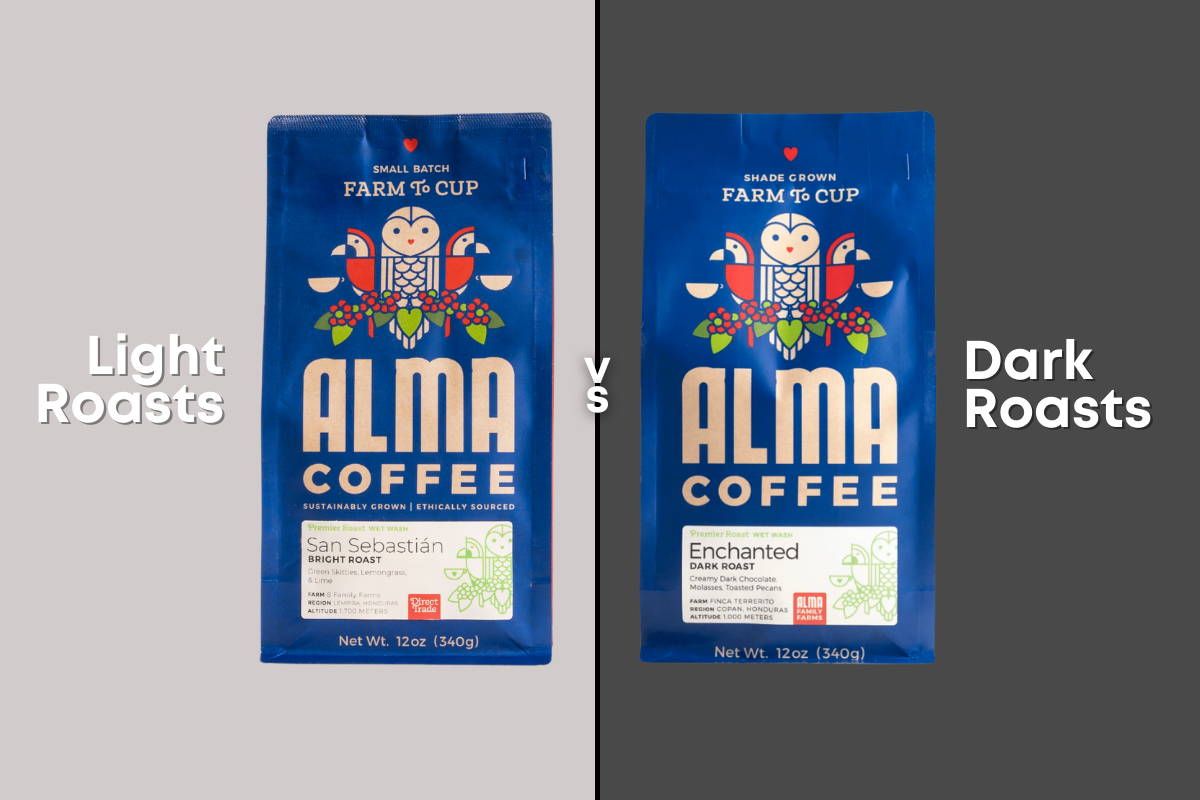 In a nutshell, the variation between what makes a coffee “light” and “dark” comes down to the final temperature of the bean mass when it leaves a roaster. A light roast, for instance, is roasted with the intention of preserving as much of the natural flavors in the green bean coffee as possible.

On the other hand, a dark roast (or even a medium roast) is roasted at a higher temperature in order to minimize, bring out, or lock in certain natural flavors. Don’t get too confused or fixated on this aspect of the roasting process, though: roasting is a craft and, thus, is a complicated process that requires skill and a lot of personal roasting preference to determine what beans get the light v. dark roast treatment. 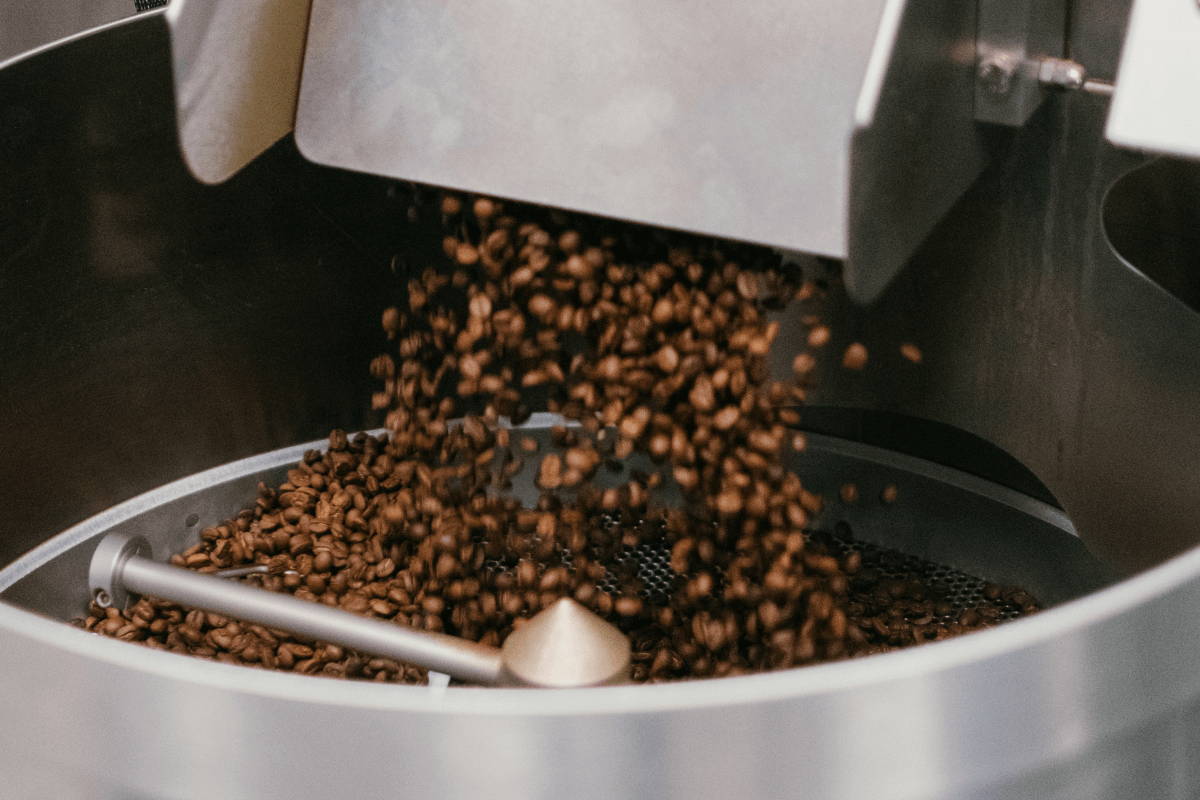 For now, it’s only important to understand that the semantics of light v. dark roasts have been confused and misused over the years, and the first part of understanding the actuality of caffeine variation between light and dark roasting is understanding that the final bean mass temperature is what actually determines if it is “light” or “dark.”

Does the roast level effect the caffeine level?

Now that you understand that light v. dark roasts have to do with the amount of time a bean spends roasting, the next part of this blog should make a whole lot of sense to you—especially if you are one of the few people in the world that enjoyed your high school chemistry class. 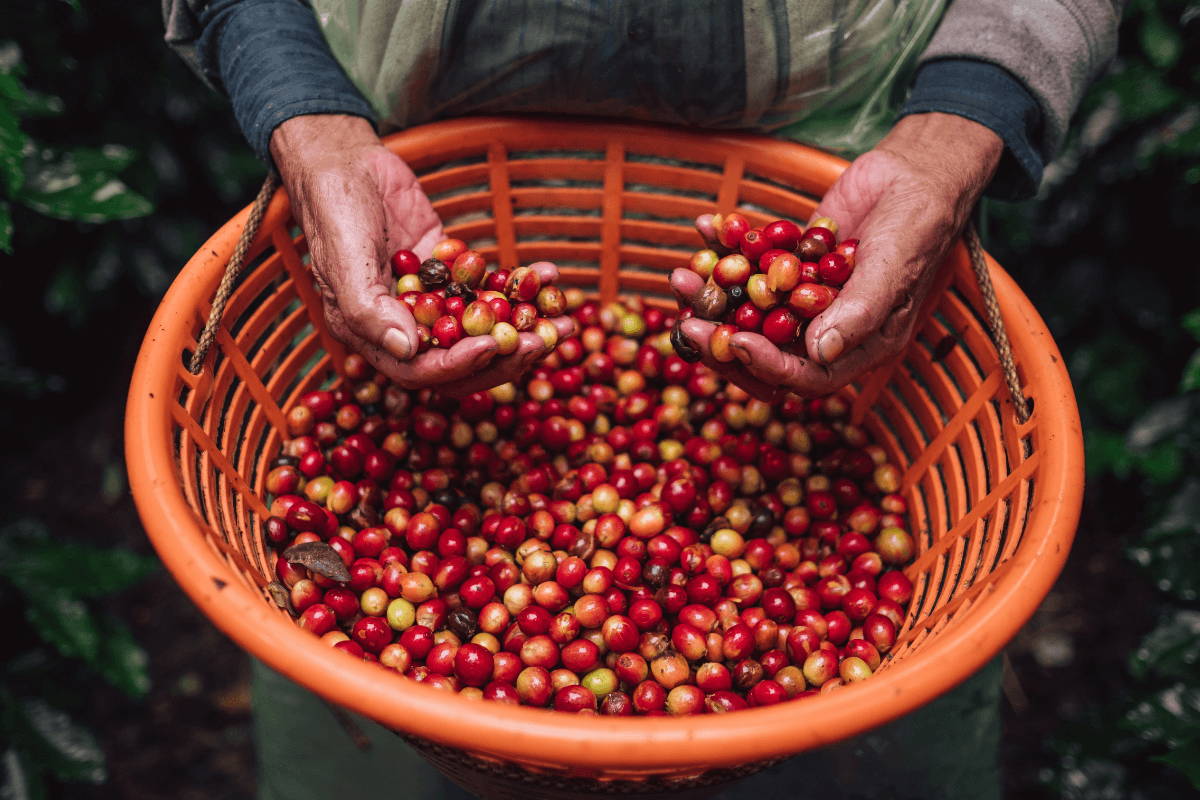 To be clear, the amount of caffeine within a green coffee bean is chemically locked to the seed of a coffee cherry before it even becomes a green “bean.” This caffeine level only really varies between different genetic strands of coffee, such as an Arabica vs. Robusta, or in different seasonal harvests of the same strand of a coffee cherry.

When a coffee cherry is processed into exportable green bean and is then roasted, however, a few things happen from a chemical perspective that can (and do) have miniscule effects on the caffeine levels within that coffee; this is probably where a lot of the confusion between caffeine variation in light v. dark roasts stems from, but we’ll get back to that in a little bit. 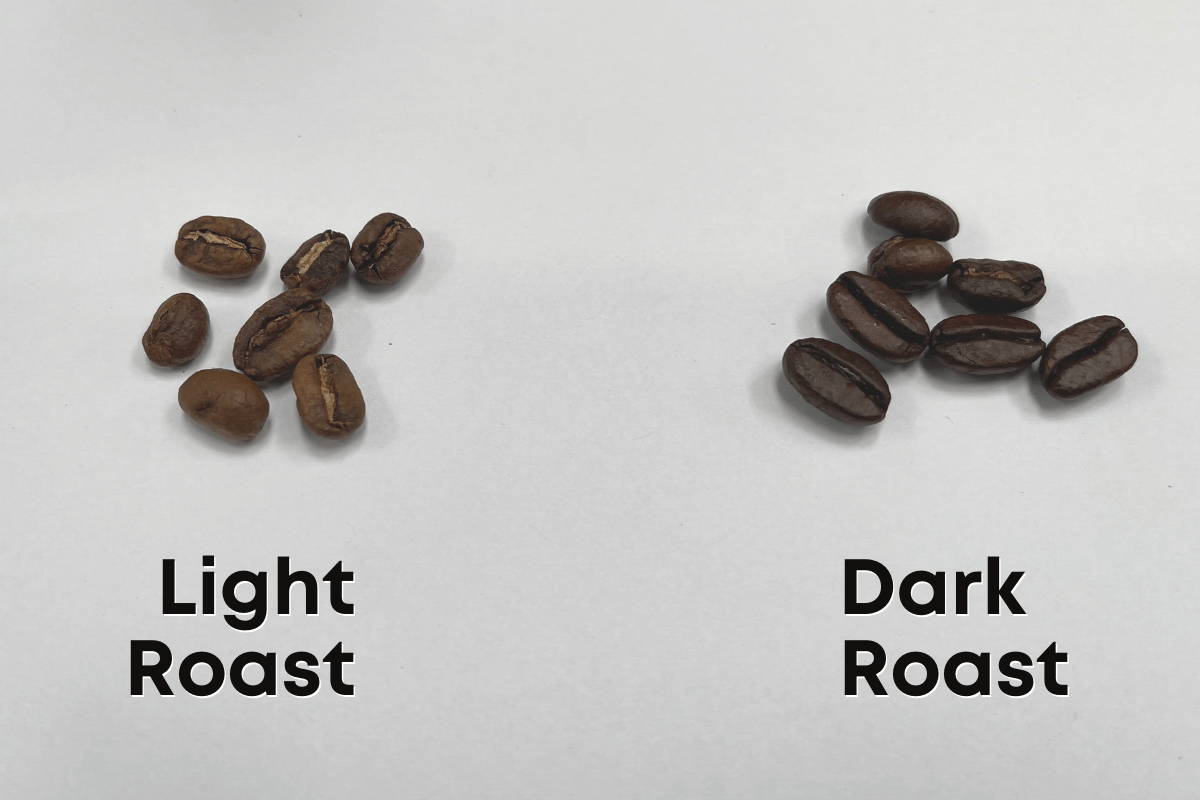 The longer a green bean is exposed to heat during the roasting process, the more water and physical coffee material is lost from its internal structure, and this chemical reaction to extended heat exposure causes the coffee bean to slightly expand as energy and material is released.

What does NOT happen during this chemical reaction is a loss of caffeine from the original green bean—at least in a way that would be noticeable on any small scale.

So, as opposed to lighter roasts, a darker roasted coffee bean becomes slightly larger in volume while containing less of its original green bean mass, and this is where the caffeine level can be noticeably reduced between a light and dark roast depending on how it is measured out and brewed.

If you were to measure out 30 grams of the lightest light roast and then 30 grams of the darkest dark roast, you may think that your scale was off when setting these two portions side by side. There is a noticeable visual difference in the two roasting profiles, and part of that difference is because (as described above) the darker a bean gets in the roasting process the more volume it occupies as material is lost.

So, if one were to brew up a cup of coffee and measure it out with a scoop and not a scale, they might unintentionally give themselves less actual coffee if scooping a dark roast over a light roast. It’s really a volume vs. mass issue at the end of the day, and that’s partially why this entire debate has become shrouded in confusion—both “sides” are right.

WHY ARE PEOPLE EVEN ARGUING ABOUT THIS IN THE FIRST PLACE?

Let us be the first to say that we don’t like to be the “logic police.” Who are we to tell people on the internet who’s right and who’s wrong when it comes to drinking their favorite coffees?

Quite frankly, the only reason we are writing this blog to begin with is because of an issue we had on our website’s FAQ. After receiving a series of questions about which roasts had more or less caffeine, we didn’t realize how many people were arguing about this very topic on r/coffee on almost a weekly basis and thought it was probably a good idea to set the record straight for all the caffeineatics out there. 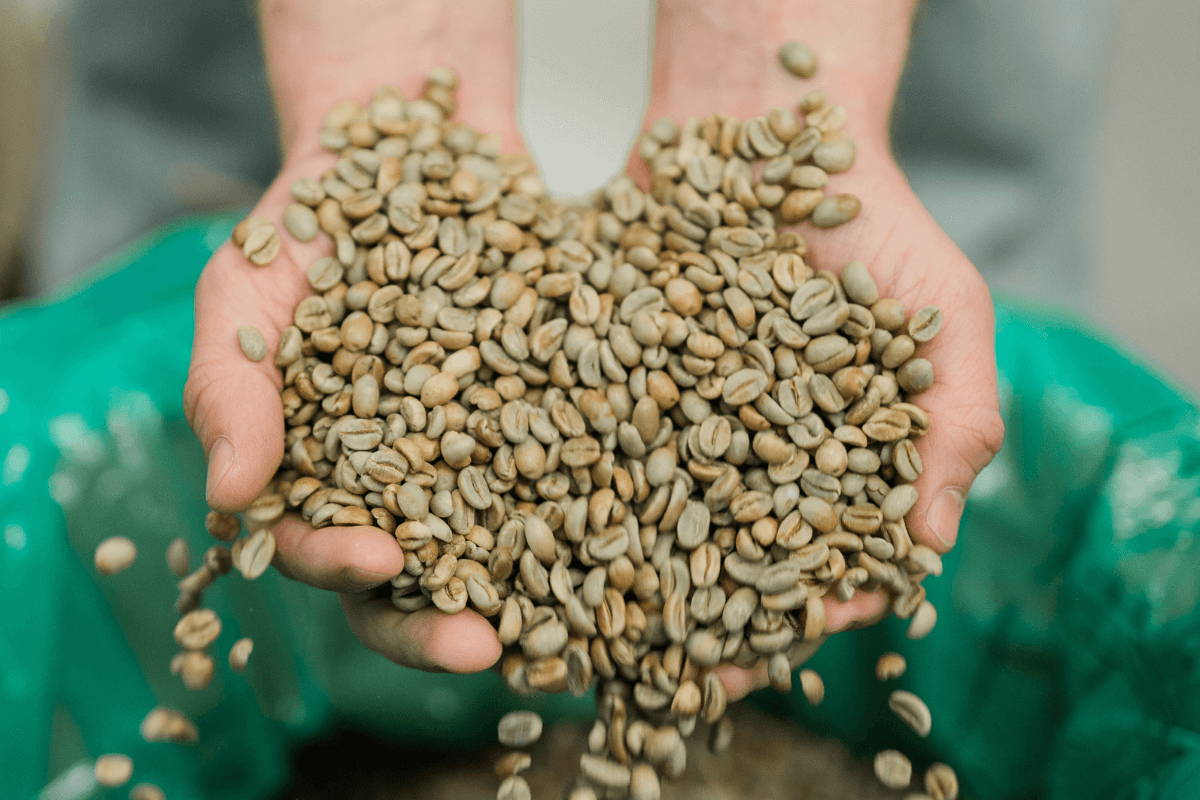 In truth, the root of this specific debate has less to do with the mass and volume confusion and more with the way people have described the coffee they do and don’t like over the years. You may have heard words such as “strong” to describe a good, black cup of coffee, and “weak” to describe a light cup of coffee.

Although the language people use to describe their perfect cup of coffee may be meaningful in helping them decipher what they like and don’t like, many coffee fanatics on the internet speculate that the descriptive words used during the 1st and 2nd waves of coffee influenced the entire debate around caffeine content in light and dark roasts.

There are, of course, a lot of other reasons why people seem to think caffeine levels shift significantly between their favorite light and dark roasts, but our anecdotal theory is probably most aligned with the notion that many regular coffee drinkers associate good black coffee with words like “dark” and “strong” and bad coffee as “weak” and “light.”

At the end of the day, as we’ve stated in virtually all of our Alma-nac blogs, coffee is about what you want. If you think light roasts are better than dark roasts or vice versa, we are here to help you find your perfect cup at Alma.

That being said, we wanted to leave off this blog post with something you can use next time you encounter an angry stranger on the internet who is very passionate about the light v. dark caffeine content debate…

The final, final answer: Yes, caffeine content does change between a light and dark roasted coffee, but not on a scale that would be noticeable on any kind of drastically noticeable scale: There is technically more caffeine in a light roast since, as we described above, more of the bean’s internal mass remains intact the less time it spends roasting; BUT, again, the difference in caffeine between a light and dark roast is very, very miniscule. It’s not like comparing the caffeine difference between a glass of green tea and a Red Bull, for instance.

What did you think of this week’s blog? Let us know in the comments if you prefer a light or dark roast and why! As always, we’d love to answer any further questions you have on the topic, and recently found out that we can’t respond to comments on the blog. If you want to know more, please email us at wecare@myalmacoffee.com, and be sure to subscribe to our email newsletter to get all of the latest happenings and blog posts before anyone else!