Decaf coffee might be the only topic that simultaneously upsets and excites people in the coffee world.

In all honesty, this mix of emotions surrounding decaf is what prompted us to start drafting up and researching this blog post only a few weeks ago. As a daily coffee consumer and former amateur barista turned writer for Alma Coffee, I can honestly say that I’ve never willingly drank a cup of decaf despite knowing more than a handful of people that can’t live without it. 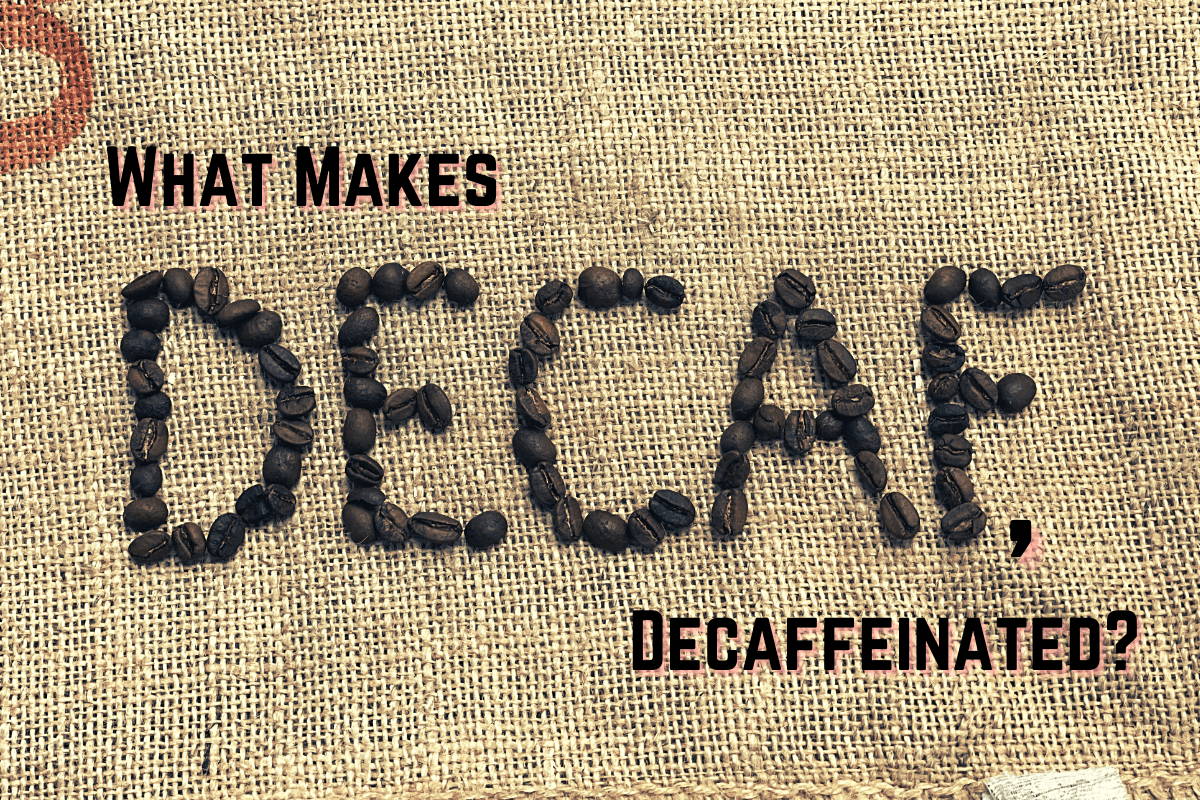 This week, we’re going to be exploring the historical origins, demand, and processing techniques that make decaf coffee a significant (and frankly underrated) part of coffee culture.

So, sit back, brew up a cup of our delicious mountain water processed decaf, and be prepared to engage with my grandma in the comments if she tries to defend her whole wheat PB & J preferences.

so, What makes decaf, decaffeinated?

Today, decaf coffee makes up nearly 12% of the coffee drinking market, and that number is about as representative of consumer demand today as it was 100 years ago.

According to the ancient legends of coffee mythology, a German coffee merchant by the name of Ludwig Roselius became obsessed with the idea of chemically removing caffeine from coffee after his father passed away of a “caffeine overdose.” 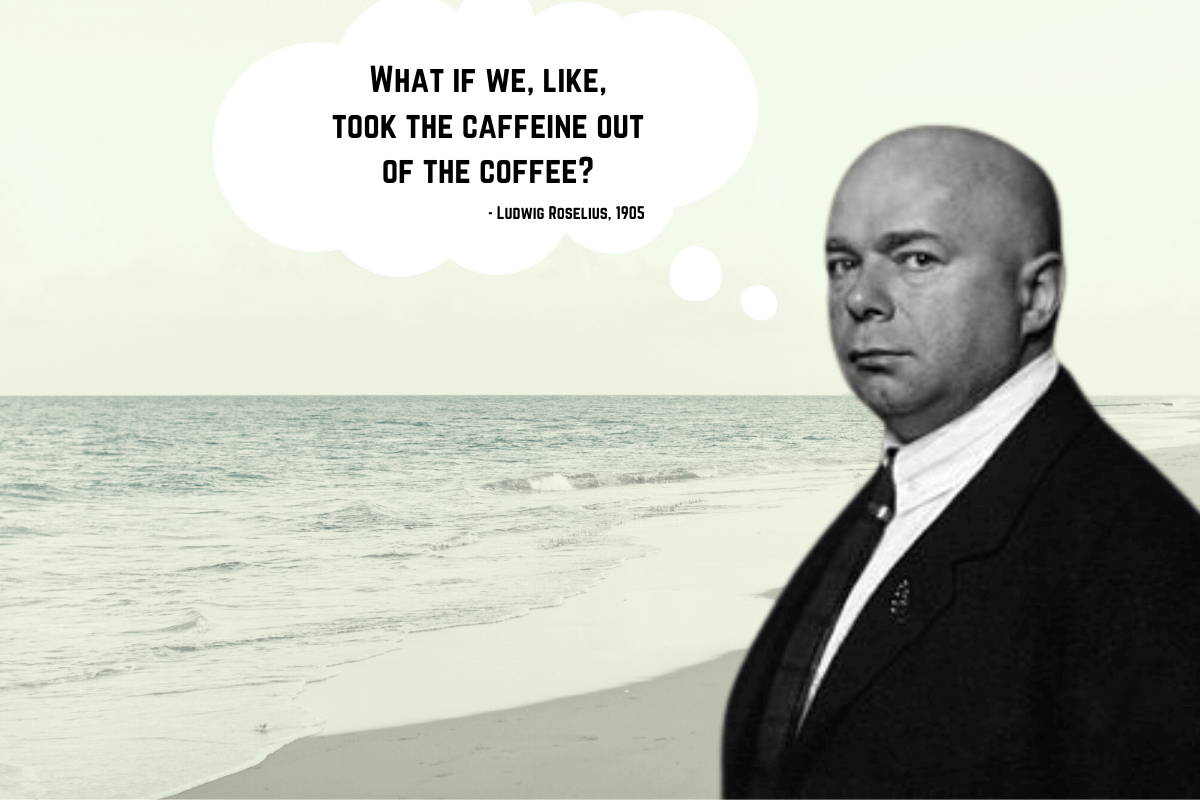 Now, before we go any further with this story, we want to remind you that this caffeine overdose origin story is, indeed, a myth.

Although caffeine moderation should be taken seriously as we covered in one of our first blogs this year, some brainy scientists recently projected it would take a total of 70 cups of coffee to cause any type of severe cardiovascular reaction. So, we'll let you make up your mind on how plausible this part of the decaf origin story is... (and also for legal purposes must say that we do not recommend trying to drink an unreasonable amount of coffee in order to test this theory out).

Regardless of what actually inspired Ludwig to pursue decaffeination, the underlying truth of decaf’s inception does stem from Ludwig’s unyielding obsession with finding the perfect chemical process for removing caffeine from unroasted coffee beans. 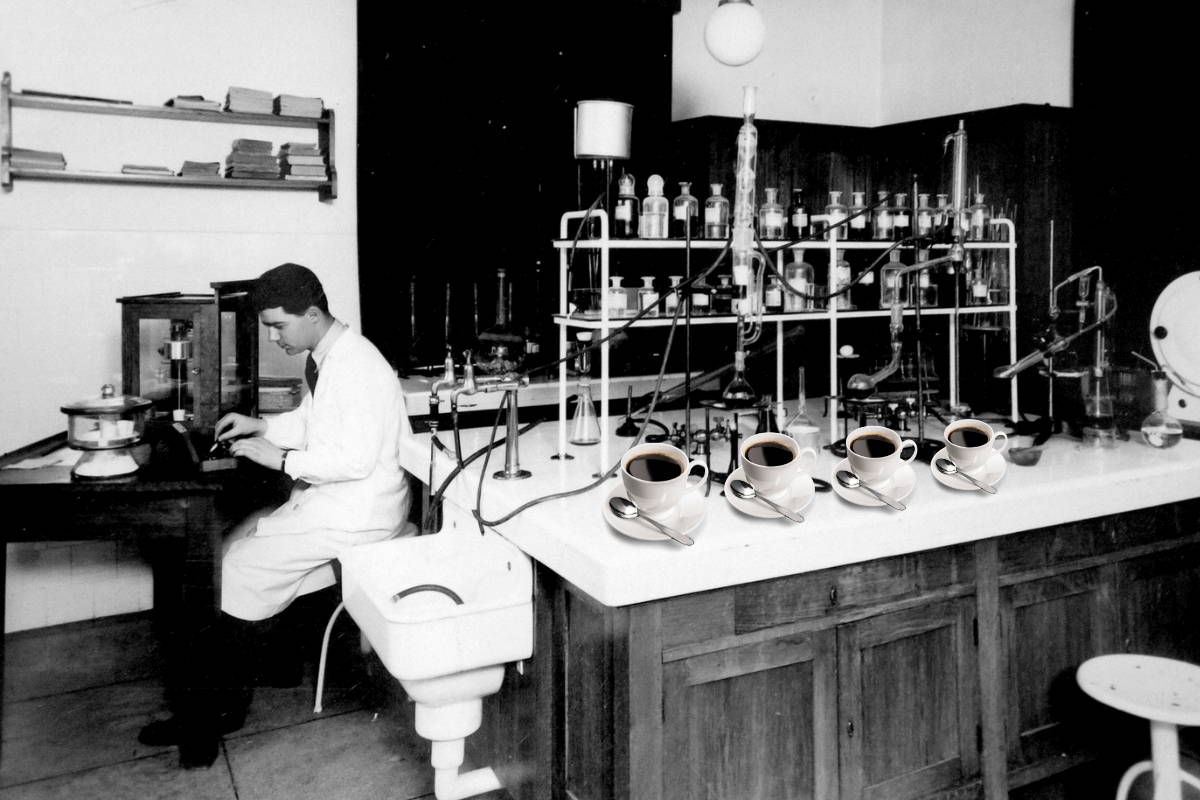 Benzene was found to quickly and effectively remove caffeine from coffee beans without altering the flavor profile too much, and this groundbreaking discovery opened the coffee world to an entirely new product and market of consumers.

Since this first chemical solvent was discovered by Ludwig in the early 1900s, the use of dangerous chemicals like benzene to remove caffeine from green bean has been replaced with a variety of different processes that, although still exciting for your high school chemistry teacher, won’t give you cancer.

I’ll save you the history lesson about each of these processes this time around, but it’s important to note that, regardless of how you do it, the very process of decaffeination through a solvent comes with inherent flavor withdrawals in green bean.

Chemical solvent decaffeination was and still is the most well-known and widely used decaf process. It begins with steaming green beans with hot water to open their pores and then soaking the beans immediately after steaming them in a chemical solvent that removes caffeine. 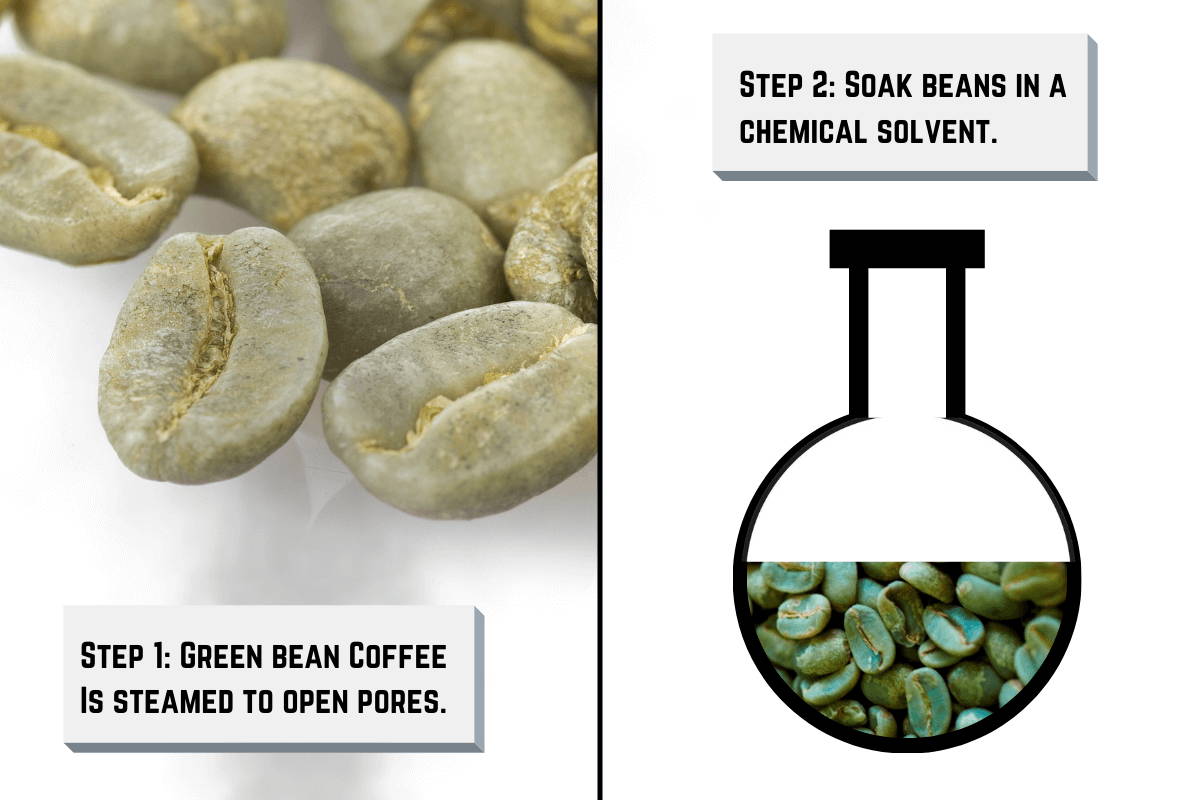 Despite the industrial grade usage of both of these chemicals outside of decaffeinating coffee beans, their effects on the body have been studied for nearly half a century and have conclusively been determined to only be hazardous under constant, voluminous exposure.

With the coffee-drinking public concerned with possible health risks, alternative solutions for decaffeination started becoming more appealing to the general public following the second wave of coffee history, and that leads us to the 2nd most commonly used decaffeination method in the modern coffee industry:

Usually, CO2 gets a bad rep because of its direct connection to human-caused climate change, but that’s neither here nor there in decaf processing for a few different reasons.

In the coffee world, if you have the money to invest into it, CO2 extraction is actually one of the most sustainable methods for caffeine extraction. Similar to chemical solvent methods, the beans are first steamed with hot water to open up their organic pores.

Then, the beans are moved to an extraction vessel that mixes the porous green beans with highly compressed, liquid CO2. This concoction is then transferred to an absorption chamber where the CO2 is decompressed back into its gaseous state and moved away from the beans. 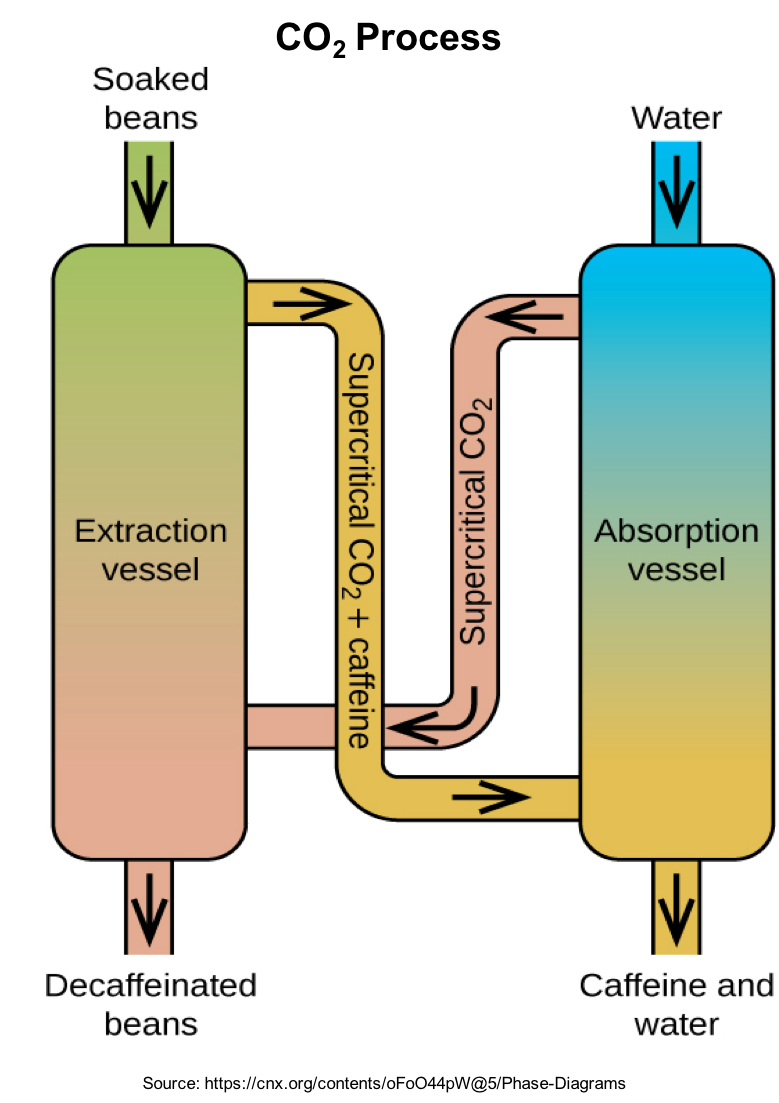 During this change in the CO2’s state of matter, up to 97% of the caffeine is taken away from the green bean as it remains chemically locked to the carbon dioxide.

Coming from someone who received a “C” in his college chemistry class, that’s the most average explanation of this process I could quickly contextualize.

What’s interesting to note is that, unlike other extraction methods for decaffeination, the CO2 method is highly sustainable in that the CO2 gas can be re-used as many times as needed. But, not every coffee roaster or farmer has the capital to invest in such elaborate machinery, and that brings us to the other sustainable and healthy alternative to direct-solvent decaffeination:

We’ll end this blog off with a decaf methodology that is used for our own Dreamer decaf roast here at Alma, and that’s water processing (also known as “Swiss Water Processing” in the coffee world).

Water processing is actually the least-complicated of all the known decaffeination methods, but it can still be expensive and/or time-consuming method for farmers to effectively accomplish.

Unlike the other two processes described in this blog, water processing begins with, well, water. 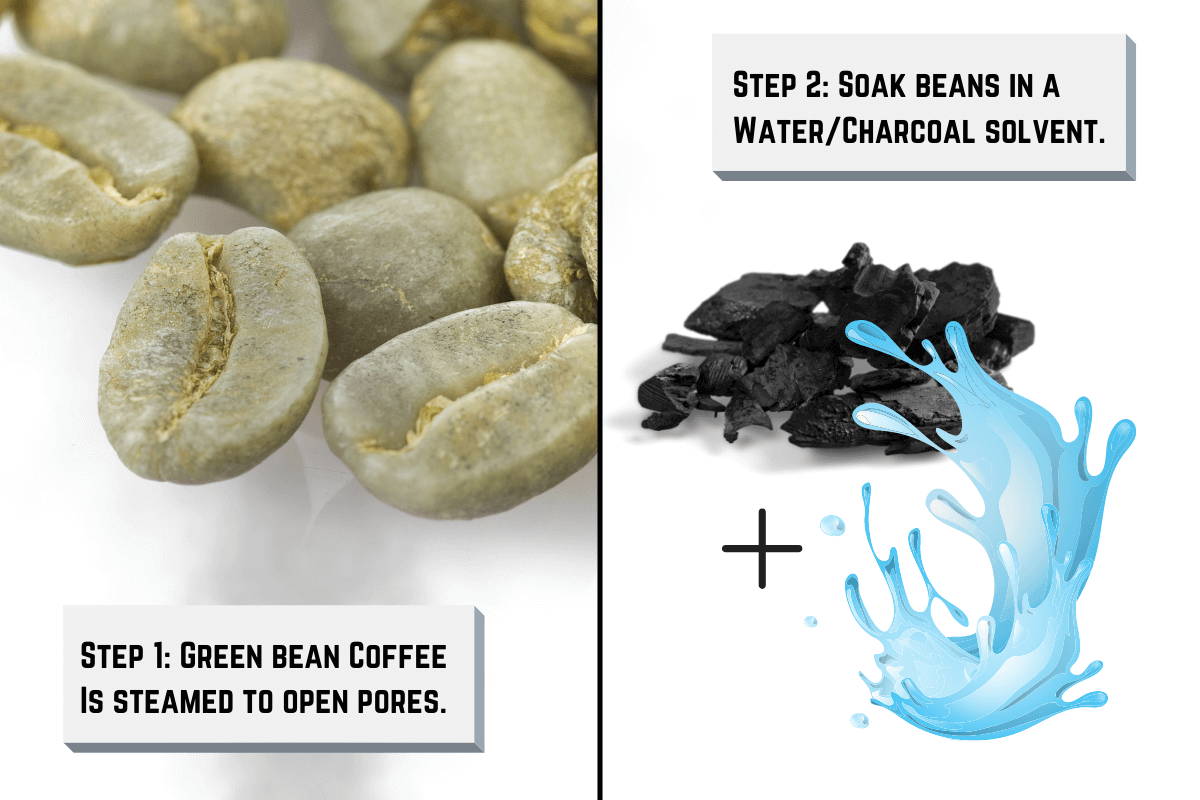 Within this vat of water itself, the flavor and caffeine compounds from the initial batch of green bean remains as a potent and nearly chemical mixture, and this is then used on several new batches of green bean as a solvent-extraction until the potency of the concoction is lost.

The water method is beneficial for specialty coffee roasters in that it preserves more natural flavors in the green beans than any other method, especially chemical solvents. This is why we prefer it for our Dreamer roast from Selva Negra.

At Alma, we source the coffee directly from a farmer in Nicaragua. For us to decaffeinate our own coffee, we would need to send an entire container (42,000 lbs!) to Mexico in order to undergo the process.

We love that we can partner directly with a farmer to bring a delicious decaf coffee to you! 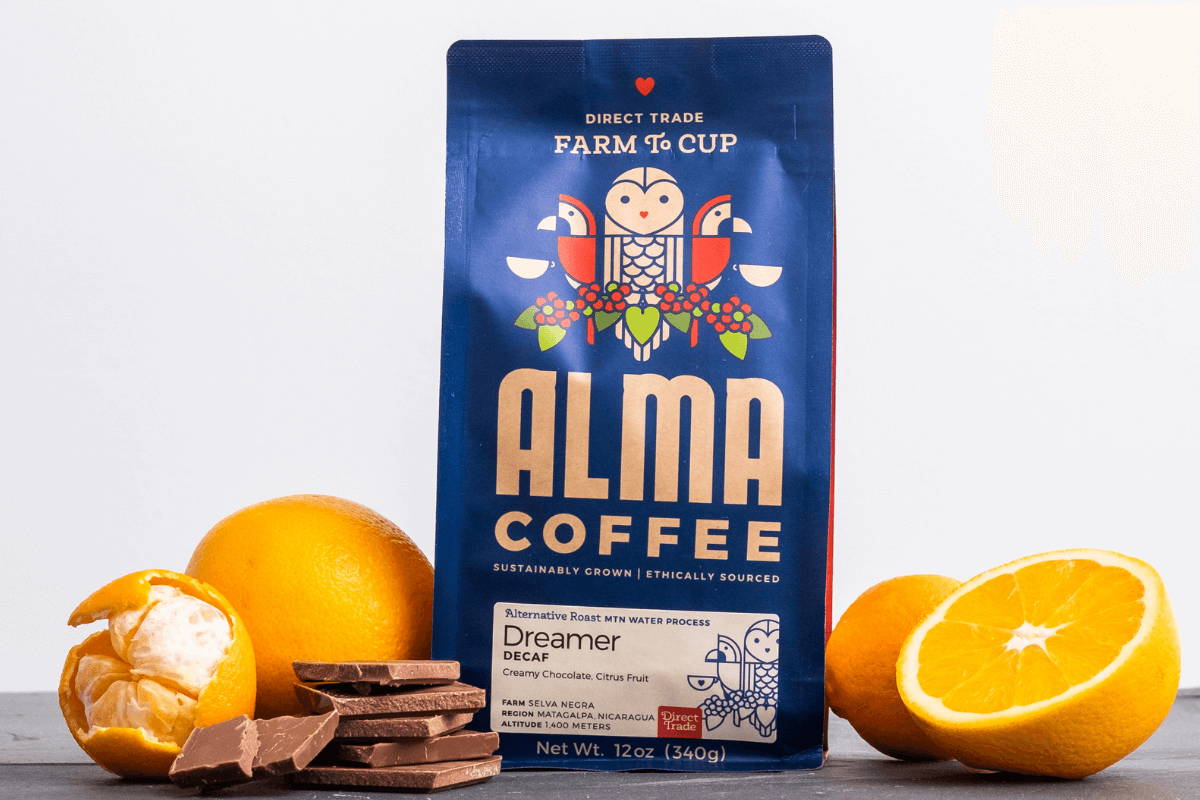 So, with all of this fresh knowledge you have on decaf coffee, we’d love to hear from you in the comments: if you’re a decaf coffee drinker, why do you drink it and what do you look for in your favorite decaf coffees?

As the industry transitions into the lucrative “fourth wave” of coffee history, many farmers and roasters are looking for cheaper, faster, sustainable, and even genetically modified decaf coffee beans. We’re excited about this possible frontier for decaf coffee, but for now we think the Dreamer decaf is still one of the most delicious roasts out there.